So the controversial EmDrive is making the rounds again, this time with a group of German experimentalists claiming to have measured a net thrust of 20 µN for 700 W of input power (link to paywalled paper). This post isn't going to pass judgment on whether the effect is real or not, but rather whether it is actually of practical use given what has been claimed so far. In order to do this I'm going to use a toy scenario I like to think about every now and then: getting a PocketQube satellite from low Earth orbit (LEO) to the Moon. 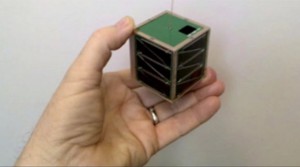 PocketQube - the satellite form factor that fits in your hand!

Since we're starting in LEO we first need to know: is this drive capable of delivering enough thrust to keep our orbit from decaying? This means compensating for drag, which according to Wikipedia is somewhere between 7.5 - 100 m/s per year depending on altitude. The questions then are "how much power do we have?", "how high will our thrust be?" and "how high is our mass?". For these I'm assuming a 5x5x5 cm PocketQube with maximum allowed mass (180 g).

Incidentally, this is why for electric propulsion thrust per unit of power is much more important than specific impulse. All the efficiency in the world isn't going to be of much use if you're dead by the time your probe arrives at its destination..